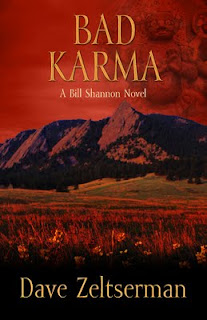 I received my author copies of Bad Karma today, which is my followup to Bad Thoughts. Now here's the deal. This book is not the noir journey of Small Crimes or the explosive and subversive thrill ride of Pariah, or even the grim horror and crime mix of Bad Thoughts. It's more of a fun hardboiled PI novel set in Boulder, Colorado with new age sentiments. It also features a guest appearance from one of my Fast Lane cast members. While this is far lighter fare than my other books and meant to be more traditional, so far the reaction from most of the early readers has been very positive, and I'll be including quotes from some of these below. Now the publisher for this one is Five Star/Cengage, and their business model is to focus their sales to libraries, so while the book will show up on amazon and bn.com and other online stores, unlike Small Crimes, Pariah, and my upcoming books, it won't be in many bookstores (if any).

If you're a Pariah fan and live in the US and would like to win one of 3 signed copies of Bad Karma (and these 3 might be the only hardcover copies I end up signing), play movie producer and email me at dave.zeltserman (at) gmail.com by Nov. 20th your cast choice for Pariah. I'll pick the three that I like best, and each winner will receive a signed copy of Bad Karma.

"Detective Bill Shannon, introduced in Bad Thoughts (2007), is back, and a welcome return it is. Relocated from Boston to Boulder, Shannon has fled the Boston PD for a low-stress lifestyle, picking up a little work on the side as a private eye. But despite his efforts to find psychic and psychological peace of mind after his horrific encounter with Herbert Winters, the demonic serial killer from the earlier novel, Shannon discovers that putting distance between himself and the old evils doesn’t help him escape the new evils. Zeltserman weaves together elements of both mystery and horror genres, as Shannon again finds himself confronting the darkness that roams the boundary beyond one’s physical senses. It’s as though Zeltserman has aimed a 12-gauge sawed-off at smarmy New Age sensitivities and fired off both barrels. Irony abounds, as Shannon unmasks deviant gurus, evil yoga studios, Russian gangsters, and guys who use their baseball implements in socially unacceptable ways. If you liked the first novel in this series, you’ll love this one."
— Thomas Gaughan, Booklist

"The violence in this book is more subdued than that in Bad Thoughts, but it's certainly there. The story is also a pretty straightforward p.i. tale, though not without some horror and New Age elements, which once again proves Zeltserman's versatility (he's doing noir novels and Nero Wolfe pastiches in EQMM, among other things). If you haven't read Zeltserman's work, it's time to start. He's making quite a name for himself these days."
Bill Crider

"The novel works on three levels. It’s part clever murder mystery and part personal spiritual journey as Shannon tries to heal his psychological scars and achieve inner peace; it’s also an informed and impartial commentary on the New Age Movement, presenting both the positive and negative aspects the subculture. This might be a standard PI tale in structure, but it shares the ingenuity which has brought a distinctive touch to so much of Zeltserman’s fiction. A competent and fascinating read."
Rafe McGregor, Tangled Web

"Rather than the pure noir of Small Crimes and Pariah, the 'Bad' books are crime fic with a horror/New Age bent. The books should be read in order since the motivation for the main character, cop and then PI Bill Shannon, is primarily developed in Bad Thoughts, then allowed to run free in Bad Karma. Bill is pretty much of a wheat-grass juice drinking, vegetarian homebody, except when he's dealing with astral projection, lucid dreams, cults, Russian mobsters, serial killers, and the like. Loads of fun here."
Corey Wilde, Drowning Pool

"...a solid PI story at its center. Shannon has relocated to Boulder and reconciled with Susan, his ex-wife, when he is hired to investigate the brutal beating death of a couple college students. He also agrees to help a desperate mother try to rescue her daughter from a local cult. True to form, both cases dovetail in the end, and Shannon ends up uncovering a larger conspiracy, and when it comes to problem solving Shannon isn’t exactly a pacifist, his penchant for meditation notwithstanding, so there’s plenty here for fans of the genre."
Nathan Cain, Independent Crime
Posted by Dave Zeltserman at 10:14 AM