Lessons from the trenches

I've gotten some requests of late to collect my last years Lessons from the Trenches into a single blog post, and I hope people can find these useful and benefit from the things I stumbled upon that helped me and avoid some of the mistakes I made along the way. 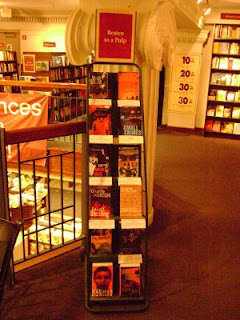 The Harvard Coop Bookstore has put together a pretty eclectic collection of noir books in this 'Beaten to a Pulp' collection, and I'm thrilled to have Small Crimes included. So if you're in Harvard Square check it out and buy some noir!
Posted by Dave Zeltserman at 7:04 AM 1 comment:

From the Metrolife book section for the UK Metro:

To describe mobster Kyle Nevin as a nasty piece of work is something of an understatement.

At the beginning of Dave Zeltserman 's white-knuckle ride of a second novel, Nevin is just out of jail after serving eight years for armed robbery and keeping his mouth shut.

Now he wants revenge, and as he heads back to his old haunts and his old cronies from Boston's Irish underworld, Zeltserman seems to be pulling off a cracking piece of straightforward, hard-boiled noir.

After Nevin and his brother bodge a kidnapping, though, the novel takes off on a killer tangent as an increasingly psychopathic Nevin becomes the darling of the publishing world, and different kinds of venality are put wittily under the microscope as the book rattles along to its terrific conclusion.
Posted by Dave Zeltserman at 7:22 PM 3 comments:

Given that Small Crimes is a trade paperback and my first with a more well-known publisher, I'm amazed (thrilled, really) with how well reviewed the book has been by world newspapers. Here's a list, with review links where I have them:

South African newspapers
The Citizen
Business Day
Posted by Dave Zeltserman at 7:45 AM No comments:

Small Crimes has just been reviewed by yet another South African newspaper. Earlier, The Citizen gave Small Crimes a very nice review, and not to be outdone, Business Day in their Weekender section gives Small Crimes a terrific review, saying:

Zeltserman has mixed together an explosive Molotov cocktail of a book. This is a dark shocker, a downward spiral of violence, betrayal, manipulation and tragic misunderstanding.

This is all very cool for several reasons--not only am I being reviewed in other continents, but I'm sharing review space with a couple of Richard Stark books (Firebreak, Breakout), which is very cool by itself. You can read the complete review here.
Posted by Dave Zeltserman at 2:39 PM No comments:

Film option rights for my novel, 28 Minutes, have been sold to Constantin Film Development and Impact Pictures, with John Tomko (Ocean's 11, Falling Down) and Jeremy Bolt (Resident Evil, Death Race) to produce, and Travis Milloy (Pandorum) to write the screenplay.

28 Minutes is about a group of unemployed software engineers coming up with an almost brilliant plan to rob a bank. Almost brilliant because things do not go as expected. UK rights are being sold to Serpent's Tail, and US rights are still being worked out by my agent, Matt Bialer at Sanford J. Greenburger Associates.
Posted by Dave Zeltserman at 10:15 AM 9 comments:

I have readings/signings for Small Crimes scheduled at some terrific local independent bookstores: