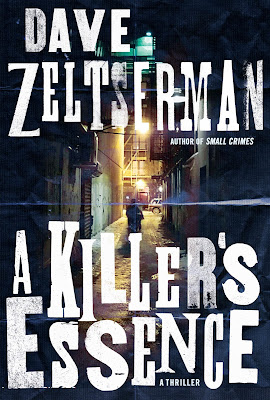 The Kindle Edition for A Killer's Essence is on sale now for $2.99! Things could've worked out so differently for this book if Penguin hadn't delayed the printing by months, which caused B&N to cancel not only their co-op but their order. It had strong film and TV interest at the start, and I went with the film option with a company that got hit hard by the financial meltdown and never recovered. Now that it's on sale I hope folks check out this supernaturally-tinged crime novel which has a good part of it taking place during the 2004 ALCS between the Sox and NY (and sox fans get to watch the Yankees meltdown from eyes of a diehard Yankees fan). This may or may not be my best book, but I think it's my best written.

“Zeltserman’s lean but muscular style, so evident in “Killer’’ and “The Caretaker of Lorne Field,’’ is just as sharply honed here. His ability to juggle Green’s story and Lynch’s, develop a riveting murder mystery, and even mix in some Brighton Beach ex-KGB sleazeballs, all in less than 250 pages, is a pretty neat page-turning trick.” Boston Globe

“This eerie thriller deftly blurs the lines between madness and the perception of reality.” —The Star-Ledger

“[A] chilling page-turner attuned to the most discerning of avid crime lovers. Well written and well paced. Recommended.” —New York Journal of Books


“Zeltserman’s signature creepiness is available here and there, but what really drives this novel is the engaging portrait of an honest, hardworking cop who, on the job and off, gives the best he’s got, knowing how rarely it will be enough.” —Kirkus Reviews

"A scary, keep-you-guessing thriller not to be missed.” Booklist

“A KILLER’S ESSENCE is complete in itself, but Zeltserman leaves just enough plot threads dangling at the end that a sequel, while not necessary, would be appropriate. And Green? I was screaming at the guy halfway through the book, but by the conclusion, I wanted to buy him a beer. And a ticket to a baseball game. Sequel or not, you need to meet Green and read A KILLER’S ESSENCE.” BookReporter

“It’s here: another entry into the gritty and grim world of Dave Zeltserman. For those unfamiliar, Zeltserman has crafted some of the darkest crime novels to have come out in the past few years, and A KILLER’S ESSENCE shows it’s still a world with no sunshine in sight.” Bookgasm

“Dave Zeltserman takes more risks than any other writer I know. With each book he pushes harder against the comfortable definitions of genre fiction: A Killer’s Essence brilliantly blurs the lines between police-procedural and horror/ paranormal. So forget about pigeon-holing Zeltserman, just grab this book and immerse yourself in the brutal world of an author who is a true original. Then (if you haven’t already) go and read all his others.” Roger Smith

Posted by Dave Zeltserman at 7:39 AM No comments: