KILLER Book of the Month 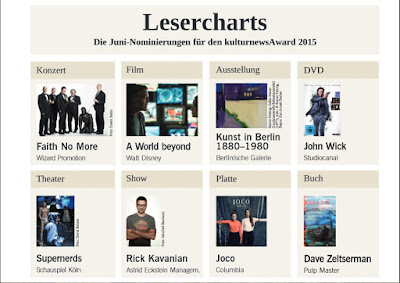 KILLER has been get outstanding reviews in German newspapers and by German readers, has twice been picked by their crime jury for their April and May top ten crime novels list, and now has been picked by the German Magazine KulturNews as the best book of the month.
Posted by Dave Zeltserman at 9:51 AM No comments:

Give an Archie for Father's Day! 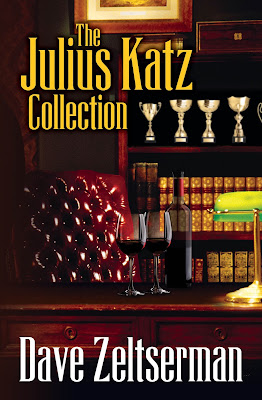 I think anybody who's read any of my Julius Katz mystery stories would agree that there would be no better Father's Day gift than an Archie, for the following reasons:

1) He's compact, no larger than a tie clip, and can be worn as such!

2) Perfect for handling those annoying telemarketing calls! Very quickly your phone number would be put on the top of their Do Not Call lists!

3) Great at handicapping horse races. He'll make you a bundle!

4) No one's better at computer hacking. With a few changes to his neuron network, Archie would be willing to make Donald Trump unwittingly pay your credit card bills, or better yet, transfer all of Trump's assets to your bank, leaving him with only that clump of orange orangutan hair that he wears as a wig. And if you wanted to have that wig snatched from Trump's head, Archie could probably arrange that also!

5) While he's only Julius Katz's assistant, there's probably nobody better other than Katz in solving a murder! And Archie works a lot cheaper than Julius!

Of course, there's only one Archie, and I'm not sure Julius would be willing to sell him (and good luck trying to take him away by force given Julius's 5th degree black belt in Kung Fu). So if you can't have your own Archie, the next best thing would be reading about his exploits (as well as Julius's).
Posted by Dave Zeltserman at 9:39 AM No comments: 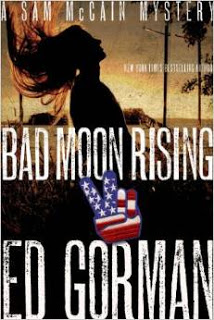 I've long maintained that Ed Gorman is one of the best mystery, horror, Western, short story writer working today, and if his Sam McCain took place on either coast instead of the Midwest, these books would be best sellers. Well, Bad Moon Rising is on sale for only $2.99, so here's your chance to try one if you haven't already, And here's what PW said about this book in a starred review.

Social turmoil overshadows the sleuthing in Gorman’s excellent ninth Sam McCain mystery (after 2009’s A Ticket to Ride). In 1968, a hippie commune near Black River Falls, Iowa, both horrifies and entices the townsfolk with its uninhibited lifestyle. Sardonic lawyer and investigator McCain becomes involved after the discovery of the body of Vanessa Mainwaring, the teenage daughter of a well-to-do local, at the commune, and a Vietnam vet who’s one of its members flees. Interference by a bigoted sheriff, an opportunistic preacher, and a hysterical father makes matters even worse as Sam tries not just to solve the murder but to help the people around him caught in an intensely stressful situation. The real crime, as Sam eventually realizes, is how one generation exploits the next—while the younger generation devours itself. In turn mellow and melancholy, this book grapples with problems that are too complex for any detective to untangle.

Posted by Dave Zeltserman at 9:37 AM No comments: