When She Was Bad by Jonathan Nasaw

My review for Jonathan's Nasaw's excellent When She Was Bad is up now on the very cool web-site, WritersAreReaders.com
Posted by Dave Zeltserman at 10:32 AM No comments:

Allan Guthrie and I discuss Small Crimes and other matters up on PulpPusher. Mucho thanks to Tony Black for setting this up.
Posted by Dave Zeltserman at 6:39 AM No comments:

I have extra drawings left over from Jean-Pierre Jacquet's pitch, and it would be a shame not to show them. 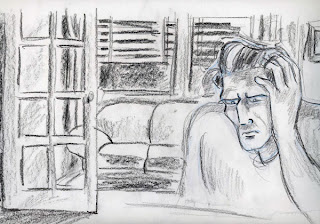 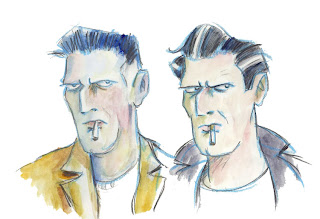 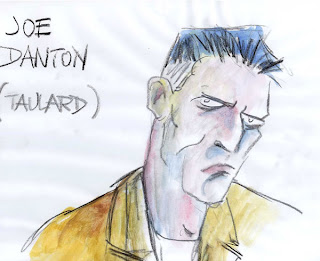 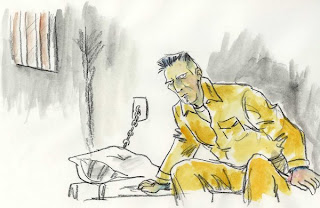 And finally, a very cool short animated piece of Jean-Pierre's that's currently up for voting on Reel 13: Contrapunto
Posted by Dave Zeltserman at 6:53 AM No comments: 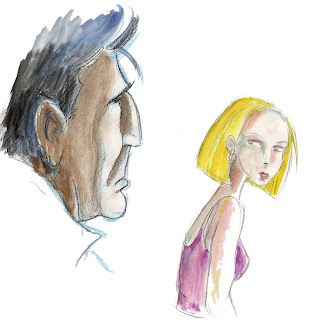 ‘You were in the paper today!’ she went on. ‘That’s why you looked familiar. You’re the guy who stabbed that DA! Holy shit!’

Tomorrow: More Small Crimes drawings
Posted by Dave Zeltserman at 8:19 AM No comments: 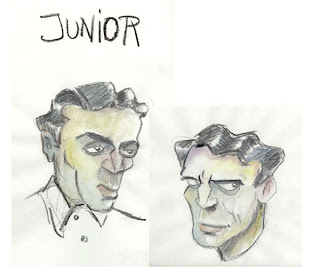 From behind me I heard a loud voice booming, ‘Hey, pop, who’s that with you?’ I turned and saw Manny Jr with what must have been two of his sons. Junior had grown to look a lot like his dad used to; a heavy, thick man with a complexion like chipped glass and a hardness about him. His two boys were probably under seven but both looked like miniature versions of him. Junior stood staring at me for a long moment before he recognized me. Then a vicious smile crept onto his face.

Tomorrow: Clara
Posted by Dave Zeltserman at 7:47 AM No comments: 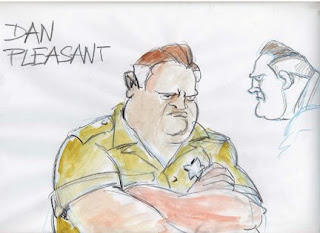 I heard a soft laughing noise. ‘How you doing, Joe?’ he said. ‘Christ, it’s been a long time.’

‘It didn’t have to be. I’d been sitting in your jail for seven years. You could’ve stopped by anytime.’

‘I didn’t think that would be a smart thing to do. But we do need to talk. Why don’t you drive out to the Mills Farm Road out in Chesterville. I’ll meet you there in a half-hour.’

There was more soft laughing. ‘That wouldn’t be very smart, Joe. No, I don’t think we want publicity. I also don’t think it would be very smart to show your face at Zeke’s. I’ll meet you out in Chesterville in a half-hour.’ There was a click as he hung up.

I walked two doors over to Ron Hardacher’s house and got my Mustang convertible out of his garage. I knew Dan would prefer it if I were dead, but I wasn’t worried about meeting him on an isolated road in the country. If he thought he could get away with killing me he would’ve done it years ago.

Tomorrow: Junior
Posted by Dave Zeltserman at 6:52 AM No comments: 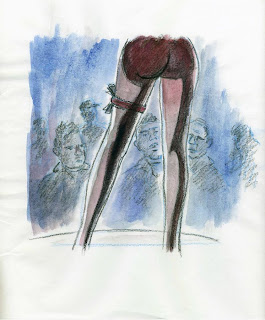 ‘I’m mad at you,’ she said, playfully, her eyes sparkling.

If it were anyone else I probably would’ve told them to take a number. Instead, I sat down in the chair next to her and asked why.

She got up and sat on my knee. The feel of her body was electric.

‘Because,’ she said, ‘I danced my heart out and you didn’t even pay attention.’ She leaned over so her mouth was against my ear. ‘Sheriff Dan told me to take good care of you, Joe.’

Tomorrow: Sheriff Dan Pleasant
Posted by Dave Zeltserman at 7:34 AM No comments: 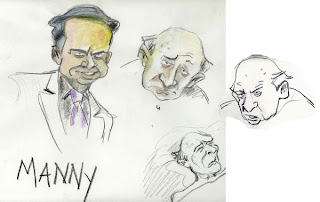 He had a private room and I could see him – or at least what had to have been him – lying on a bed. Manny used to be a thick, heavy man with skin like hard rubber. What was lying on that bed was a third of what Manny had once been. It was almost like a balloon that had been mostly deflated. And that thick rug of black hair he had was gone. But it was his eyes that got me. They weren’t the same hard ruthless eyes that I used to know. Instead they were the eyes of a scared and frightened man.

Tomorrow: Toni
Posted by Dave Zeltserman at 6:17 AM No comments: 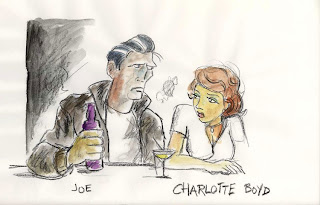 She hesitated before taking my hand. Her own hand was small and disappeared in mine. Even though she looked a bit mousy and her hair was too thin, she had some nice features. Especially her eyes when they weren’t nervous. They were a soft hazel color and were nice to look at.

‘I’m Charlotte Boyd,’ she said in a muted voice.

We had shaken hands longer than we should have. I made the first move to let go.

Tomorrow: Manny Vassey
Posted by Dave Zeltserman at 6:47 AM No comments: 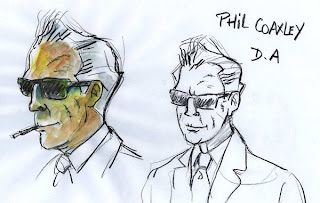 A cab was waiting for me, but there was a man bent over, talking to the driver. The cab pulled away, and as the man stood up I recognized him instantly. I’d have to with the way his face was carved up and the thick piece of flesh that was missing from his nose. At one time, he had been a good-looking man, but that was before he had been stabbed thirteen times in the face.

Morris looked a bit uncomfortable. ‘Well, uh,’ he said, ‘it was a pleasure having you as my guest, young fellow. If you ever want to stop by for a lesson on the theory of checkers, feel free.’ Then, seriously, ‘Try to stay out of trouble.’

He gave me a pat on the back and waved to the other man before disappearing back into the building. The other man stood grinning, but it didn’t extend to his eyes. Looking at him was like staring at an open-mouthed rattlesnake.

At its heart, the novel is about Man’s relationship with God and the moral choices life throws up. And make no mistake: this is an intensely moralistic fable. The crimes may start small, Zeltserman seems to be saying, but bigger crimes soon follow. Not so much a highway to hell as a full-on rollercoaster ride. Just remember to keep your arms inside the carriage at all times.

To read the whole review, click here.
Posted by Dave Zeltserman at 6:48 AM No comments: 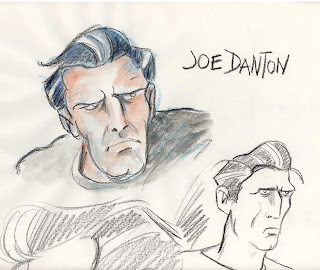 When I thought about all the things I did, none of it seemed possible, but all I have to do is look Phil Coakley in the face to prove to myself it all happened. So now I was an ex-police officer, a felon, and a divorced husband. I hadn’t seen or heard from my ex-wife or kids since the day I was arrested. Other than Morris I hadn’t had any visitors or company for seven years, not even my parents. When I thought about all that I’d lost for money I didn’t even want, I could barely believe it.

Tomorrow: Phil Coakley
Posted by Dave Zeltserman at 6:44 AM 4 comments:

The Cast of Small Crimes

Before I sold Small Crimes to Serpent's Tail, Jean-Pierre Jacquet and I were proposing Small Crimes as a graphic novel to a French publisher. We went through several editorial board meetings--came close--but in the end the publisher felt Small Crimes was too mature for their audience. In the process of all this, Jean-Pierre drew up sketches of the cast of Small Crimes, which he's graciously allowing me to use. With Serpent's Tail days away from releasing my book in the UK, I'm going to start publishing these sketches here along with small excerpts if I can find appropriate ones early enough in the book.

First, the back cover copy Serpent's Tail came up with, and tomorrow an introduction to Joe Denton.

'Crooked cop Joe Denton gets out of prison early after disfiguring the local district attorney, which doesn't help his popularity. Nobody wants Joe to hang around, not his ex-wife, his parents or his former colleagues. Meanwhile, local mafia don Manny Vassey is dying of cancer and keen to cut a deal with God. He's thinking of singing to the DA if this will set him up for a better afterlife. And he knows stuff that will send Joe down again for a very long time.

Set in the pressure cooker of a very small town, Small Crimes is an explosive thriller that brings the claustrophobic hell of Jim Thompson and James M. Cain right up to date.'
Posted by Dave Zeltserman at 10:42 AM No comments: