The Next Big Thing: The Interloper

I was tagged last Wednesday by my friend and fellow Top Suspense author, Libby Hellmann for this--

What is the working title of your next book?

Where did the idea come from?

I had this preposterous  idea for a government conspiracy thriller that I just couldn't let go of, and this led to me writing the novella  THE HUNTED, which led me to wanting to write a series of novellas where some would be part of the same conspiracy idea with a Spillane/Destroyer feel, while others would be pure crime heist with more of a Richard Stark/Parker feel and others a mix of the two. So the next one up was THE DAME. And that led me to wanting to write a 3rd, THE INTERLOPER, and wanting to see if I could package the three of them as a novel.

What genre best defines your book?

Which actors would you choose to play your characters in a movie rendition?

What is the one-sentence synopsis of your book?

Will your book be self-published or represented by an agency?

The first two novellas have been self-published, but my agent is now shopping all 3 as a book.
How long did it take you to write the first draft?

What other books would you compare this story to within your genre?

Who or what inspired you to write this book?

Partly my love of the Richard Stark Parker books, partly wanting to do a similar series, and partly having this preposterous conspiracy idea I couldn't let go of.

What else about the book might pique the reader’s interest?

The first part, THE HUNTED has a shocker of a secret, and the 2nd and 3rd parts are for readers who love violent crime heists novels.

Now for the tags:
Look for their posts next week and consider trying…their Next Big Thing!


Posted by Dave Zeltserman at 8:40 PM No comments: 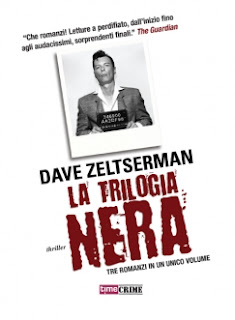 My Italian publisher, Fanucci Editore, was originally going to publish Pariah as a standalone novel, but they decided instead to publish all three of my 'man out of prison' books in a single volume under their new TimeCrime imprint. The artwork they used for the cover was the artwork they were going to use for Pariah. While Serpent's Tail and PulpMaster made Kyle Nevin (rightfully) more demonic on their covers, Fanucci went more for a bad ass look, which is still fitting.

It's possible there's a fiercer and more ruthless first-person narrator in a crime novel than Kyle, but if there is, I haven't come across the book yet.

Posted by Dave Zeltserman at 2:53 PM No comments: 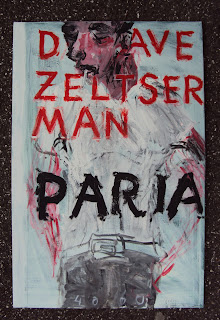 My German publisher for Pariah, PulpMaster, create very distinctive paintings for their covers, all modern pieces of art that could be hung in galleries, and their cover for Pariah is no different. What they've done with Kyle Nevin, is make him part man and part demon, which is extremely apt!


Posted by Dave Zeltserman at 7:52 AM No comments: 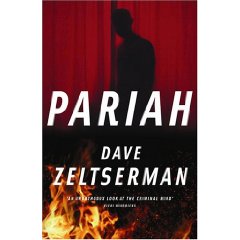 Serpent's Tail did a fantastic job with this cover for Pariah. An ominous Kyle Nevin in the shadows with the cabin beginning to erupt in flames. This cover not only captures the darkness and explosiveness of the book, but it was a great choice using Red Mahoney's cabin, which in the book was a place of evil and abomination.

Posted by Dave Zeltserman at 9:59 AM No comments: 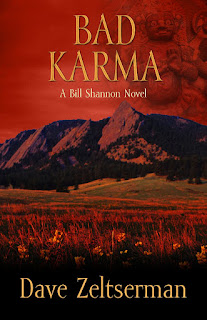 Next up is Bad Karma, which beat Pariah to publication by a month. My publisher's original cover wasn't very good, but they were willing to work with me to come up with this cover. Unfortunately the earlier rejected cover got submitted to Amazon and stayed up there until recently.

This cover still doesn't really work for the book, which is a hardboiled and somewhat new agey PI novel set in Boulder, Colorado dealing with cults, gangsters, and evil yoga studios. But at least the mountains being shown are the Flatirons, and the image superimposed in the right upper corner is the Hindu god Kali, who is related to karma.

At some point I'm going to put Bad Karma back up as an ebook, but with a new title and a cover more relating to the cult aspect of the book.
Posted by Dave Zeltserman at 2:49 PM No comments: 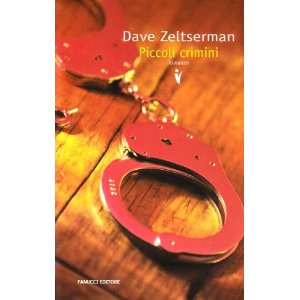 The Italian edition of Small Crimes went in a very different direction  for its cover than  the US and French editions. This cover is straight from a scene from late in the book.

Posted by Dave Zeltserman at 7:42 AM No comments: 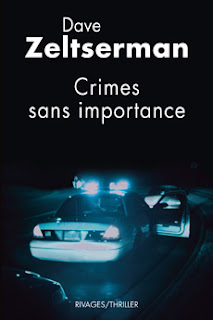 The French edition for Small Crimes went for a similar design as the Serpent's Tail cover, but even darker and more noirish.
Posted by Dave Zeltserman at 9:32 AM No comments: 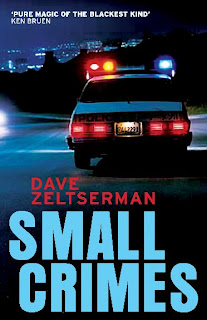 I like what Serpent's Tail came up. The overall look is attractive and the nighttime shot and the police lights flashing gives an indication of darkness and crime. Serpent's Tail is a UK publisher so I can't hold it against them that this looks a lot more like California than a small Vermont town. Of course, I think it would've made the cover even better if Serpent's added how the book made both NPR's and Washington Post's best of the year lists.

Posted by Dave Zeltserman at 9:58 AM No comments: 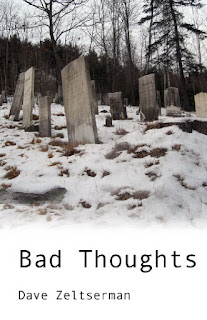 My publisher for my second book, Bad Thoughts, came up with a cover which, being kind, wasn't very good, but they agreed to let me provide my own artwork. My friend (and my wife's cousin) Laurie Pzena is an extremely talented painter, graphic artist and photographer, and I asked her if she could come up with a cover, suggesting taking a photo at a cemetery, and what she came up with for Bad Thoughts I think is great. My publisher ended up darkening it, changing the color and font, but I always liked her version better, so  when I put Bad Thoughts out as an ebook I went back to her original version for the cover.

While there are no scenes in a cemetery, Laurie's photo expresses the grim nature of the book and that it's horror, even though the description and first 50 or so pages might make it seem like it's a police procedural.

Posted by Dave Zeltserman at 10:51 AM No comments:

Meridiano Zero's cover for Fast Lane went in a different direction by focusing on the detective angle as opposed to the psycho noir aspect of the book, although this black and white photo still has a noirish feel.

Interestingly, I sold the Italian rights for Fast Lane about a year before selling the US rights to Point Blank Press.


Posted by Dave Zeltserman at 1:00 PM No comments:

Looking back at my book covers: Fast Lane

Over the next 3+ weeks I'll be looking back at my book covers in the order of their publication dates, including the foreign edition covers. First up is Fast Lane. 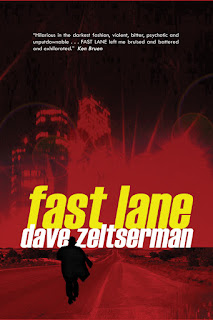 J.T. Lindroos, graphic artist and publisher of the legendary Point Blank Press, came up with this brilliant cover--an apocalyptic scene of a man rushing towards a city bursting into flames. Not only does this capture the essence of this psycho noir novel, but it's also very close to one of the scenes from the book.

A quick story about the writing of Fast Lane. I wrote the first draft in 1992, and in '96 I was working with an agent who wanted me to start the book earlier in the story to show Johnny Lane in a more positive light so the reader could be more sympathetic to him by the time he has his psychotic break. I'd heard the same from other early readers, so I wrote around 45 additional pages. At the time I was using an early version of Microsoft Windows, and just as I was finishing these 45 pages my computer crashed and I lost these pages (I hadn't made a backup, or printed them out yet). I wouldn't be able to swear in court that I retyped those 45 pages from memories exactly as I originally wrote them, but I'm pretty sure I did, and there's no way I'd ever be able to do that again.

Posted by Dave Zeltserman at 10:48 AM No comments: 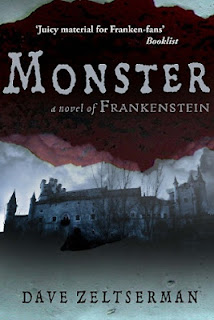 Duckworth's cover is similar to the US cover with some small tweaks, but I like what they did. I also like the book description they came up with:

Monster cleverly – and chillingly – reanimates a classic tale. Friedrich Hoffman, the so-called monster, recounts how he was falsely accused of killing his fiancée, tortured and killed for his ‘crime’, and awoke on the lab table of Victor Frankenstein – a man with all manner of gruesome plans. We see inside Friedrich’s mind as he embarks on a single-minded quest for vengeance; but at what cost to the remnants of his humanity?

Intense and gothic, Monster depicts nineteenth-century Europe in a blaze of depravity, excess and supernatural terrors, in an ingenious tribute to one of literature’s greatest works.

Posted by Dave Zeltserman at 8:06 AM No comments:

How my short stories have fared

I don't write many short stories. Sometimes I'll write one when I have an idea burning inside me that needs to get out, but usually I write a story only when a magazine or anthology ask me for one. Still, over the last couple of years my stories have been faring pretty well. Here's a quick summary:

Shamus Award from the Private Eye Writers of America 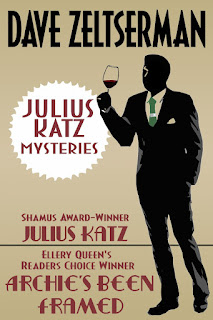 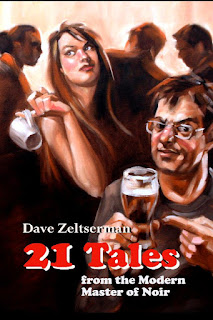 More Than a Scam can be found in 21 Tales


Posted by Dave Zeltserman at 7:46 AM No comments: 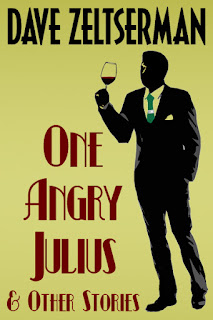 I was happy to see my story, Emma Sue, was named a notable story by this year's Best American Mystery Stories. Emma Sue was originally published in ON DANGEROUS GROUND: STORIES OF WESTERN NOIR, and is available in my Kindle ebook collection, ONE ANGRY JULIUS & OTHER STORIES. This makes the second story in my ONE ANGRY JULIUS collection to be recognized this year as A Hostage Situation was earlier nominated for a Thriller Award.


Posted by Dave Zeltserman at 6:50 AM No comments: 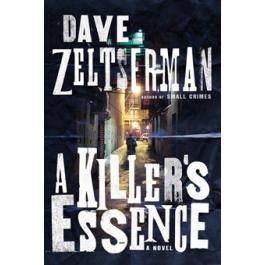 A KILLER'S ESSENCE is now out in trade paperback, and is currently in film development from Braven Films. Here's the first chapter.