Excerpt from THE INTERLOPER + reward changes

With 26 days to go, THE INTERLOPER kickstarter project is 67.5% funded, and to help drive it to 100% I've added a new $5 pledge level which will have as a reward a digital copy of THE INTERLOPER, and I've changed the $10 and $25 levels to now have digital copies sent to 4 friends instead of 2.

Below is an excerpt from the beginning of THE INTERLOPER, and you can also read what some folks are saying about THE HUNTED and THE DAME here.

At one fifty-four in the morning Dan Willis had a ski mask pulled over his face as he sat patiently in a stolen pickup truck, the engine idling softly in the darkness, the lights off. The pickup truck had been backed into an alley off of a desolate city block in East Boston made up almost entirely of abandoned factories and burnt out warehouses. There was still one operational warehouse on the block, and if things went right the crew Willis was working with would be stealing one point five million dollars worth of pharmaceutical drugs within the hour.

Four minutes later the car Willis was expecting drove past him. While he didn’t know what car it would be or who would be driving it, he and the rest of the crew were still expecting someone to be driving toward the warehouse at this time. In this case it turned out to be a badly dented older model Ford Escort. Willis waited where he was until one of the other crew members turned on the brights of the stolen car he was in and accelerated directly at the Escort, forcing the other car to slam on its brakes. Willis then gunned the engine and swung his pickup truck out of the alley and pulled up behind the Escort, blocking the vehicle. Willis got out of the vehicle and moved fast to the driver’s side door of the Escort, then tapped the window with the barrel of the .40 caliber pistol that he was holding. The driver of the Escort looked like a college kid. His eyes grew large and his skin paled to the color of milk as he focused on the gun. Willis tapped the window again and signaled for the kid to lower the window. The kid was scared to death but he did as he was directed.

“I’ve got about forty dollar on me,” the kid forced out in a faltering voice. “You can take my money, the car, the pizzas, please, just don’t hurt me.”

“If you shut up and act smart, you won’t get hurt. Get out of the car now, and leave the keys where they are.”

The kid did as he was told. Willis had him take off a grease-stained jacket and an even greasier-looking baseball cap, both of which had the name of the pizza shop the kid worked for stitched on them. Willis tossed these to Charlie Hendrick, who was the driver of the other stolen car and was standing off to the side. If the kid driving the Escort was closer to Willis’s size, Willis would’ve put on the jacket and cap, but the kid was six inches shorter than Willis and was closer to Hendrick’s height, although around twenty pounds chunkier. Hendrick was the one who had put this heist together, and like the rest of the crew except for Willis, was in his late twenties, and with his ski mask off looked like the typical slacker who maybe shaves once every couple of weeks and hangs out all day playing video games and smoking weed. Big Ed Hanley, Willis’s agent for this job, had told Willis that Hendrick and the rest of his crew might not look like much at first, but that they were smart and professional, and so far this turned out to be accurate.

As Hendrick slipped on the jacket and cap, Willis used duct tape to bind the kid’s wrists together behind his back, then after hitting the Escort’s trunk release latch and dumping out the garbage filling up the trunk, Willis had the kid get into it. It was a tight squeeze but Willis was able to position the kid so he could close the trunk on him. The kid was shaking badly and looked like he might pass out or start vomiting at any moment.

“Relax, kid,” Willis told him. “I’m not going to gag you or bind your ankles together. In thirty minutes the police will be here. Just kick the inside of the trunk and they’ll find you. You’ll be fine.”

He closed the trunk on the kid. Hendrick was on his cell phone finishing up his call with one of the other crew members. He nodded to Willis and got into the car the kid had been driving. Willis first moved the stolen car Hendrick had been using so that Hendrick could continue on to the warehouse, then he got into the pickup truck and followed him, all the while keeping the lights off. Willis pulled over far away enough from the entrance so that security guard working the front desk wouldn’t be able to look out the glass vestibule door and see the pickup truck in the dark. Hendrick had pulled up to the main entrance as if he were only delivering pizzas.

From Willis’s vantage point he could see the events that played out next, and it was exactly what Hendrick had told him would happen, not that he thought it would be otherwise. Hendrick brought the pizzas to the vestibule door, was buzzed in, and then as he was handing the pizzas to the security guard at the front desk, he pulled the pizza boxes back just enough to make the guard lean forward to reach for them, which got the guard’s hands away from the security alarm button on the side of his desk. As the guard awkwardly took hold of the two large pizza boxes, Hendrick, in a quick and fluid motion, slipped from his back waistband a nine millimeter Glock and brought it out in front of him, pointing it at the security guard, who just stood dumbly for a moment before putting two and two together. Willis didn’t wait any longer. He hit the gas and brought the pickup truck up to the front warehouse entrance. Hendrick buzzed him in, and at this point the security guard was sitting on the floor behind the desk, his wrists and ankles bound with duct tape, a gag stuffed in his mouth. The guard peered up at Willis with a hurt, sullen look, probably mostly angry at himself for allowing himself to get taken the way he did.

Posted by Dave Zeltserman at 7:35 AM No comments:

I have just started a kickstarter project for the 3rd chapter of my Hunted series, THE INTERLOPER. Instead of being novella-sized, this one is 150 pages which puts it more the size of a Gold Medal paperback, but my plan is to put all 3 together as both an ebook and paperback. If you've read an enjoyed any of my hardboiled crime fiction, you'll like THE INTERLOPER, which is probably the twistiest and most action-packed  of my Hunted series.

It's going to be up to you the readers to decide whether THE INTERLOPER exists as an ebook and paperback or stays as a file on my computer. I basically need a combination of 200 ebook and 80 paperback sales for this to happen. So it's all up to you!

If you want THE INTERLOPER please help spread the word about this kickstarter project. That's the only way this will work!

Posted by Dave Zeltserman at 7:20 AM No comments: 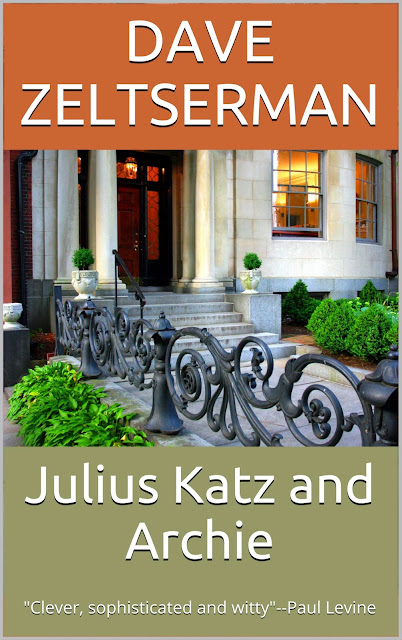 The funnest of my Julius Katz works is the full-length novel, JULIUS KATZ AND ARCHIE, where Julius is hired by a Boston mystery author to find out who is planning to kill him, except there's a catch, and things aren't quite what they appear to be, and Julius soon finds himself embroiled in his toughest case. And things quickly  turn personal when an attempt is made on Julius's life (which is foiled by Archie!)

Anyone who's enjoyed any of the Julius Katz stories that have been appearing in Ellery Queen Mystery Magazine will want to read JULIUS KATZ & ARCHIE, and with a countdown sale underway, you can now get it for a ridiculously low price of $0.99 for the next 2 days!