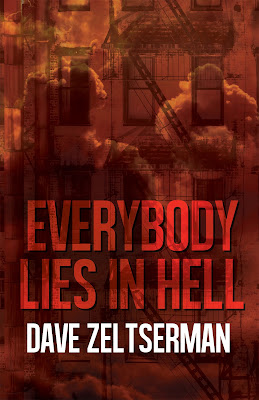 My next novel EVERYBODY LIES IN HELL will be published by Eraserhead Press October 1st. From the back cover copy:

Hell can be a tricky place with all of its rules. Mike Stone, hell’s lone practicing private eye, thinks he has it figured out, and more often than not, solves the cases that come his way. It’s not easy, though. Not with the fact that everyone in hell lies. And not with having to worry about a barbaric warlord from a long-forgotten time after his head. Or a compatriot of Vlad the Impaler wanting to purify his soul in a chamber of horrors for all eternity. Or that his circa 1992 Brooklyn private hell might be absorbed at any moment by a more aware soul. And then there’s that creepy Mortuary Man and whatever his agenda might be.

When Stone takes on a young woman as a client who wants him to find out who murdered her, it turns out to be his most dangerous case yet, and what he discovers might just be Hell’s biggest secret.

"In Everybody Lies in Hell Mike Stone's eternal damnation is a private detective's office in a re-imagined Brooklyn. In Hell, the beautiful woman with a case opens a literal Pandora's Box, and Stone is soon inundated by all-too-recognizable evils and lies of Hell's tortured souls, powerful ancient demons and devils, and haunting personal ones. Classic pulp, noir, and horror--think James N. Cain and Bukowski and Palahniuk--are all ground up in a blender and the result is a nasty, wild, and ultimately redemptive novel that only Dave Zeltserman could write."
--Paul Tremblay, author of A Head Full of Ghosts

"Everybody Lies in Hell is a wild adventure centered on confronting our demons--literally and figuratively. At once compulsively entertaining and bizarre, Zeltserman has written a metaphysical masterpiece. Hell has never been so much fun."
--Jon Bassoff, author of The Drive-Thru Crematorium

EVERYBODY LIES IN HELL is available for preordering now from Amazon.

Posted by Dave Zeltserman at 8:04 AM No comments: