The Origin of Manny Vassey 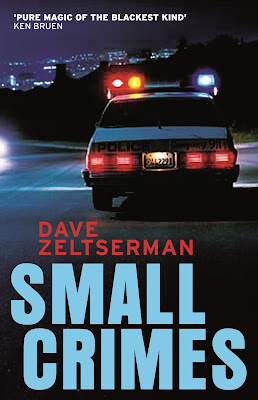 Manny Vassey, my dying mobster from SMALL CRIMES, first appeared in one of my very early short stories TRIPLE CROSS, and instead of being from my fictional Bradley, Vermont, this version of Manny is from Chicago. Here's a short excerpt that shows Manny's first appearance in Triple Cross:


They tied me to the table, securing the wire through the steel rings. They then left me alone. Shortly after that, a wide heavyset man entered the room. He was wearing a purple running suit and about five pounds of gold chains, and had a broad smile stretched across his face. His complexion reminded me of chipped glass. The other two men joined him. One of them was carrying a large metal case. I heard the heavyset man addressed as Manny Vassey.

The idea of Junior's playroom from SMALL CRIMES also first surfaced in this story. For some reason I liked Manny enough to include him in two more of my early stories: NEXT TIME and NOTHING BUT JERKS. Years later when I wrote SMALL CRIMES, I brought Manny back--really two versions of him--a sick and dying version, and the way he was from these early stories, except I made this version his son, Junior. In a way, I now had two Manny's for the price of one!

And if you've seen the movie, and you're wondering what happens in Junior's playroom, here's an excerpt from the book that will give you an idea:


Dan stopped to push a hand through his hair and scratch the back of his head. When he looked back at me, he gave me a faint, almost apologetic smile.


“Let me tell you about this special room he built,” he continued. “This college kid up in Burlington was supposedly manufacturing and distributing crystal meth without Junior’s blessing. A few months ago this kid disappears without a trace, and then a rumor starts circulating about Junior’s special room and how Junior had this college kid brought there and tied to the butcher’s table. According to the rumor, Junior chopped the kid up with a meat cleaver and burned the body parts in the furnace. I had to investigate it. Even though I knew it could end up biting me in the ass with Manny, I had to look into it. So I got a search warrant and sure enough I found a soundproof room with nothing in it but a butcher’s table and a furnace. Forensics went over it with a fine tooth comb but Junior must have scrubbed it clean.”


Posted by Dave Zeltserman at 2:34 PM No comments:

Seeing my book made into a movie 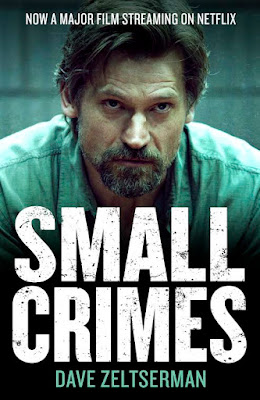 When I wrote SMALL CRIMES back in 2003 I had no expectation of seeing it made into a movie. Back then I'd had two short stories published in magazines, I'd written two other books (FAST LANE and BAD THOUGHTS) that I hadn't yet been able sell, and all I was hoping for was to write a book that could be published.

When SMALL CRIMES was filmed last summer, my wife and I spent a day at the set. This was when they were filming at Joe's parent's home with Nikolaj Coster-Waldau, Robert Forster, and Jacki Weaver, and when we got there we were put in a girl's bedroom on the second floor while they were blocking out the first scene of the day, which is when Joe stormed up to his parent's bedroom. So we were sitting around talking to one of the producers, and all of a sudden we heard all this foot stomping and yelling, and I was feeling goosebumps hearing my book come alive. Rumble Films, the crew, all the actors couldn't have been nicer. Probably my best day as an author. This beat out getting a call from John Williams at Serpent's Tail that they wanted to publish SMALL CRIMES, probably even beating out NPR picking SMALL CRIMES as one of their top 5 crime & mystery novels of 2008.

So what was it like when I finally got to watch the movie? I'd been prepared for the changes between the movie and the book--I'd read the script, and knew up front what had been changed. There always has to be changes for a number of reasons, including movie length, budgetary concerns, director's vision. But even with all the changes and the last third of the book gone, the movie still feels very much like my book, and the film's Joe Denton feels very much like my Joe Denton. As good as all the actors were (Robert Forster, Jacki Weaver, Robert Cole were all pitch perfect, and Molly Parker gave an amazingly nuanced performance as Charlotte Boyd), Nikolaj's performance was brilliant. He played Joe as someone desperately trying (and failing) to con those around him that he just wants to be a better person, but at times cracks show through, revealing the true Joe. In all sincerity, I think this is a smart, brilliantly acted film, and Evan Katz and Macon Blair did a masterful job merging their vision with mine so that both exist simultaneously.

So what was it like to see my book made into a movie? A thrill. No other way to describe it.
Posted by Dave Zeltserman at 11:05 AM 5 comments:

Small Crimes gets a mention on the Tonight Show!

Monday night Nikolaj Coster-Waldau (Jaime Lannister on Game of Thrones, Joe Denton in Small Crimes) showed up on the tonight show to talk about the movie based on my book, and the book gets a mention! Watch it here.


Posted by Dave Zeltserman at 11:16 AM No comments: