Over at Ed Gorman's blog

I'd like to thank Ed for profiling me on his blog, as well as reprinting a good chunk of our interview that we did for Mystery Scene, and especially for sharing his thoughts on the second book of my Serpent's Tail "man out of prison" series, Pariah, which is being published next month in the UK (probably in the US next June).
Posted by Dave Zeltserman at 7:36 AM No comments:

Wishing all a happy holiday season, and a healthy and prosperous New Year! 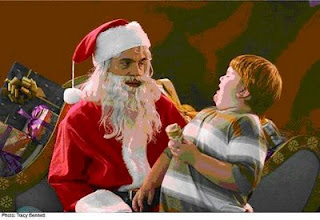 Posted by Dave Zeltserman at 2:25 PM No comments:

"Small Crimes" is a strong piece of work, lean and spare, but muscular where a noir novel should be, with a strong central character whom we alternately admire and despise.

Best part of being reviewed by the Globe, my parents who live in Brookline and have been reading the Globe for probably over 50 years, now get to brag to all their friends about it.
Posted by Dave Zeltserman at 9:56 AM No comments:

End of the road for Fast Lane

Fast Lane is a book I have a lot of affection for, and given emails I've received over the years from members of the hardboiled/noir reading group, Rara Avis, it's a book that hardboiled and noir fans really dig also. This was not only the first book I ever wrote, but it was also the first piece of fiction I ever wrote that I intended for publication, and in some ways its also one of my more ambitious books with it being both psychotic noir and hardboiled PI deconstruction, while also being thematically about the corrosive effects of child abuse as its passed from one generation to the next. While the writing at times is kind of rough, it's also very high energy and it fits the book. Given all that, I've decided to take it out of print, and purchasing of new copies should be turned off by middle of January.

I have no qualms with the publisher, Point Blank Press. They are what they are--a small POD house that has very limited distribution and almost no marketing, but my hope is to someday be able to find a home for Fast Lane--either in its current form, or maybe as a graphic novel--where it can end up better marketed and distributed. With Small Crimes selling as fast as Serpent's Tail is able to print and ship copies here, and with Pariah coming out soon---which is the book that both myself, my publisher and editor at Serpent's Tail are really excited about, I think it's worth taking the chance. I hope it happens, 'cause I have little doubt that given the right home, Fast Lane would find its audience.
Posted by Dave Zeltserman at 8:11 AM 6 comments:

More Small Crimes on the web

Poisoned Pen Bookstore has come up with their best of 2008 lists, and I was happy to see Patrick Milliken, who is their resident hardboiled/noir aficionado, as well as the editor for the upcoming Phoenix Noir (Akashic Books), included Small Crimes in his list.

C.T. Henry over at his Mystery Bookshelf includes Small Crimes in his Holiday Gift Guide, as well saying some good stuff about it:

"The writing is taut, and Zeltserman keeps you guessing in this excellently crafted thriller. While Joe tries to go straight, circumstances always seem to work against him. You keep asking yourself: How’s Joe going to get out of this one? The twists and turns of the novel are very entertaining, and the ending is pitch perfect. Highly Recommended!"
Posted by Dave Zeltserman at 8:03 AM No comments:

BookBitch probably has the most creative misspelling of my name that I've seen yet (Zeletserman), but they're highly recommending Small Crimes in their review, so all's good. More on the web, former Chicago Tribune book reviewer, Dick Adler, who gets my name right, has some nice things to say about Small Crimes over at his blog, The Knowledgeable Blogger, including: "Great plot twists, a family straight from hell, lots of sharp and often hilarious writing. Who could ask for anything more?" Also, Steven Sill over at I Love A Mystery feels Small Crimes is noir at its best. And finally,The South African paper, The Citizen, reviews Small Crimes, and also likes it.
Posted by Dave Zeltserman at 4:53 PM 2 comments: 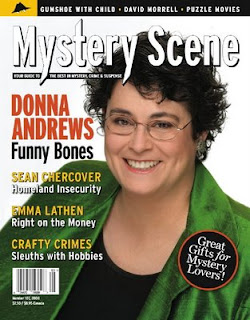 My ribs are still sore from the tattooing Ed Gorman performed with his brass knuckles, but give the guy and his methods credit, he got the truth out of me and it's all there in the pages of the current issue of Mystery Scene Magazine.

Seriously, I owe a huge thanks to Ed Gorman for doing the interview, and to Kate Stine for running it.
Posted by Dave Zeltserman at 12:22 PM No comments:

What can I say? It has to be NPR's Top Crime and Mystery Novels of 2008 and The Washington Post's Best Books of 2008, especially their mystery and thriller selections ;)
Posted by Dave Zeltserman at 8:43 AM No comments:

I'll be signing copies of Small Crimes at Kate's Mystery Books annual holiday party this Friday from 6:30 to 7:15, as well a slew of other authors (their own books, not Small Crimes!). This is my 4th Kate's holiday party and they tend to be a lot of fun, kind of like a mini-Bouchercon party, and if you're near Somerville it would be a fun way to spend an hour or two--plus you're only a few blocks from Redbones, which has some of the best barbecue in the area and an amazing beer list.
Posted by Dave Zeltserman at 10:04 AM No comments:

Over the last year or so one of my favorite crime fiction/literary blogs has become DaRK PaRTY ReVIEW--and not just because GFS3 posted a YouTube video of Nancy Sinatra singing "These Boots are Made for Walking" ;). GFS3 recently asked me if I wanted to contibute a monthly column to his DaRK PaRTY, and as a result of that my first "Thoughts from the Shadows" can be found over there today where I tackle the question: Would Jim Thompson be published today. Like to hear people's own thoughts on this question!
Posted by Dave Zeltserman at 7:36 AM No comments: