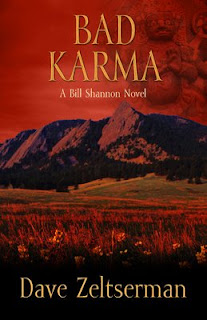 Five Star just sent me this fantastic cover for Bad Karma (due this Oct.) The mountains in the background are the Flatirons (Boulder, Co.)
Posted by Dave Zeltserman at 2:14 PM 2 comments:

All of a sudden I've got a bunch of books coming out--6 in total over the next 2 years, and with some luck maybe a couple more (although those would have to be with pseudonyms). Here's a quick rundown:

Pariah (Oct. 09, Serpent's Tail)--This is the second of my loosely themed "man out of prison" crime noir novels, and probably the one I'm most excited about. It's definitely the most explosive book I've written, as well as the most subversive.

Bad Karma (Oct. 09, Five Star)--Sequel to Bad Thoughts, although instead of being the grim and weird mix of horror and crime that Bad Thoughts was, this one is a hardboiled PI set in Boulder, Colorado, with some quirky new age aspects to it.

28 Minutes (July 10 (UK), Serpent's Tail)--My bank heist thriller that's been optioned to Impact Pictures and Constantin Film Development. The US publisher for this one is still being worked out.

Caretaker of Lorne Field (Overlook Press)--This one's an allegorical novel, written as a mix of noir, sci-fi, and horror. A caretaker believes if he doesn't weed a field every day the world will end. Either he's insane or he knows something no one else does.

Essence (Overlook Press)--Gritty crime noir with supernatural elements. The book is placed in Brooklyn and Manhattan, with the time frame for most of the book centered around the 2004 ALCS Red Sox--Yankees playoffs, with the Yankees choke job (the worst in the history of professional sports??) seen through the eyes of a Yankees fan.
Posted by Dave Zeltserman at 8:19 AM 3 comments:

Twitter: a fad, a colossal waste of time, or something else?

The Boston Globe today has an interesting article on the value of Twitter. Here are a few less than enthusiastic opinions that were offered in the article:

"I hate to be curmudgeonly," said Tom Davenport, who holds the President's Chair in Information Technology and Management at Babson College, "but Twitter reminds me of the CB radio fad. Twitter fans are the same people who last year were excited by Second Life. And where has that gone?"

On his blog on the Harvard Business Publishing website, Davenport wrote, "Let's face it - Twitter is a fad."

"First, as a professor there's a certain 'Decline of the West' aspect to the Twitter idea that you can say anything meaningful in 140 characters," he explained.

"But Twitter has more problems than that: First, it's not very measurable; second, I don't think it's possible to do brand management in 140 characters; and third, as soon as companies start using Twitter in an aggressive way, it could take on the clutter of e-mail."

"We pay a lot of attention to Twitter since it can be a very active market sensing tool," he said. "What's more, it's ushering in a new level of customer responsiveness because of the real time aspect of its feedback loop."

"I've done a lot of poking around within Twitter, and we have a company Twitter feed," he said, "but it is clear to me that in many respects Twitter is a very powerful magnet for valuable time that can be better spent elsewhere."

Like a lot of authors today, I'm trying to decide whether it makes sense to fall into this potential time sucking rat hole, and my gut's telling me this is a fad that will eventually pass. I'm sure in the very near future the twitter community will, like all fads, embrace a "twitterized" novel or two (or three), and the publishing world will then jump on it and buy it for a ridiculous amount, which will leave all the rest of kicking ourselves for not jumping on the Twitter bandwagon, but I just don't see how this can sustain itself, and as much as younger cell phone users might enjoying texting, at some point they'll find themselves swamped with "tweets", and start regarding these as little more than email spam. At least that's my gut.

Anyway, for the time being I don't see the point for writers to jump on this, especially given that we typically spend 6+ months holed up writing our novels, so how many interesting "tweets" can we possibly send out there?

I do think, though, it would be an interesting experiment for one of the crime fiction webzines (Thuglit, for example), to try twittering their short fiction, and see what happens.
Posted by Dave Zeltserman at 8:49 AM 1 comment:

Kevin Tipple, who has previously reviewed both Fast Lane and Bad Thoughts, has probably as good a perspective on my writing as anyone out there, has recently recently written what I consider yet another very perceptive review, this time on Small Crimes.
Posted by Dave Zeltserman at 4:44 PM 3 comments:

From the Harvard Coop 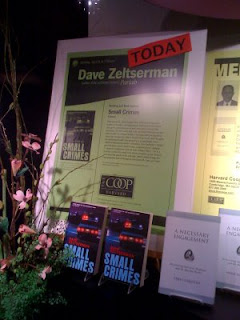 The above picture was taken by a friend last night at the Harvard Coop, where I had a reading event which was a lot of fun. As with the Brookline Booksmith, the person organizing it was extremely well prepared, and the people working there are not only book lovers, but they had read Small Crimes and were fans. Add in dinner at Henrietta's Table, and all in all, a very nice night. And it didn't hurt to see that the Yankees and their $370 mil payroll get smoked in their season opener!
Posted by Dave Zeltserman at 10:17 AM 7 comments: