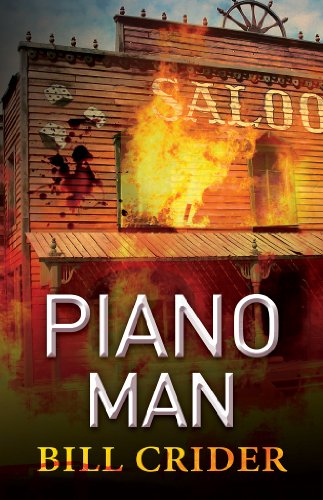 I was just the piano man. Nobody ever paid any attention to me. My job was to play while the customers gambled and whored and drank. I never said much, but I'd watch and I'd listen. That's what I was doing the night a man named Morgan bet his daughter on a poker hand.

Back in 2006 when Ed Gorman and I were putting out the Western noir issue of Hardluck Stories, Bill Crider gave us a gem of story titled Piano Man. Later, we published this and others in the  anthology On Dangerous Ground: Stories of Western Noir, and Piano Man has since been published as an ebook, this time by Brash Books.

The piano man from the story's title is a nameless piano player at the Bad Dog Saloon circa 1880. He's someone who blends into the background, hardly ever noticed, and plays whatever music the saloon needs at that time--Rock of Ages for a man's funeral song when he thinks that man is about to be killed, Oh, Susannah to get the room in a more festive room, etc.

The piano man watches as Morgan bets and loses his daughter in a hand of poker to the crippled and ruthless saloon owner, a man named Taber. He feels bad for this girl--a blonde, angelic-faced fifteen year-old, and he imagines the horrors she must endure at the hands of Taber. He watches Morgan's pathetic attempts to return to the saloon several times in order to rescue his daughter, each attempt ending with Taber's bouncer brutally beating the man.

The piano man's room is directly above Taber's, and every night he has to hear Taber defiling this poor girl. Does he want to rescue this girl himself? Or is he secretly jealous that he's not the one doing these things to the girl?

An event occurs that gives the piano man a chance to step out of the shadows, and as with my favorite noir, it's his self-deception and off kilter rationalizations that ultimately doom him. This is a soulful, moody slice of noir that packs a wallop, and it was an honor to be able to publish this, just as it has been an honor to have known Bill for a good number of years. It's no secret that Bill has entered hospice care, and that news broke many hearts in the mystery community, mine included. Not only is Bill a hell of a writer, but he's one of the most decent and nicest people I've known, and he's been incredibly generous to me over the years, as I know he's been with many others. I consider Bill a good friend, and as difficult as his situation is, I know if there's one person who can handle it with dignity and grace it's Bill.

Posted by Dave Zeltserman at 11:04 AM

Gonna have to pick up that story. Sounds like it might be a bit tough to read.