A Killer's Essence -- Chapter 1 (also available for Nook and Kindle) 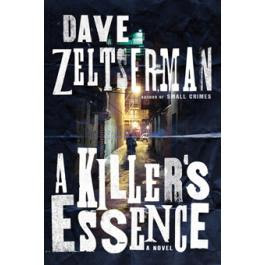 Here's the first chapter of A Killer's Essence. It's a short one, but I've also got Nook and Kindle versions for anyone preferring that--just send me email letting me know whether you'd prefer a Nook or Kindle file.

Back in 1972 I was seven years old and always tagging along after my older brother, Mike. This was before the attention you have today on child abductions and pedophiles—that evil existed, shit, it has probably always existed, but it wasn’t on TV or the news much, if at all. You didn’t have CNN and the Internet to focus on it twenty-four seven, and as a result a lot of parents didn’t think about it. Back then it wasn’t all that unusual for a seven year-old and a bunch of ten year-olds to spend their afternoons hanging around their Brooklyn neighborhood unsupervised. And that was what Mike and his friends and I used to do, at least when he and his friends couldn’t shake me, and I was a tough little bugger to shake back then, just as I am now.

This one afternoon it was just Mike and me. We had just spent a half hour in Bob’s Drugstore thumbing through the comic books until the owner got fed up with us and told us to buy something or leave. Mike spent a dime on a Skybar candy bar. He broke off the caramel piece for me and we left anyway. While we were walking past the fish market a man came out and offered us five bucks to clean up the backroom. Mike wanted that five bucks, but something about the man made me grab onto Mike’s arm and pull him back while shouting “No!” repeatedly as if I were demon possessed. Mike looked at me as if I was nuts, and I thought he was going to punch me, but that wouldn’t have stopped me from what I was doing. A couple of older men from the neighborhood wandered over to see what the commotion was about, and the man from the fish market started to look nervous. He told us to forget it and he went back into his store.

“What’d you do that for, Stan?” Mike demanded, his narrow face taut and angry. “Five bucks! You know what we could’ve bought for five bucks? Are you stupid?”

At this point I was crying. I couldn’t explain to him why I did what I did. I couldn’t say it out loud. I couldn’t have him think I was even nuttier than he already thought I was. Anyway, all I wanted was for us to get away from there, so I kept pulling on his arm, using every ounce of strength I had to drag us away from that store. One of the neighborhood men gave me a concerned look and told Mike that he should take his little brother home. Mike looked pissed, but he did what the man asked him to. All the way home he kept asking what was wrong with me.

Later at dinner Mike told our folks what had happened and how I cost us five bucks. Pop asked why I did what I did, but I couldn’t explain it to him. He shook his head, disappointed-like, and gave me a lecture about the value of money, but left it at that.

The next night while we were eating dinner, Mr. Lombardi from down the hall knocked on our door. Chucky Wilson, who was a year older than Mike, hadn’t come home yet from school and he wanted to know if either Mike or I had seen him or knew anything. We didn’t. He looked tired as he apologized for interrupting our dinner. Pop asked him if they needed any more help looking for Chucky. Mr. Lombardi thought about it, but shook his head and told Pop to finish his dinner and if they still hadn’t found Chucky in another hour he’d let Pop know. After Mr. Lombardi left I told Pop that Chucky was with that man from the fish market.

“That man from the fish market must’ve promised Chucky five bucks also. That’s where Chucky is!”

“I’m not! I’ll bet anything that’s where Chucky is!”

“Stop it now!” Pop ordered. “Christ, I don’t know how you get these ideas.”

None of us had much of an appetite after that, Mike and me mostly pushing our food around our plates and Pop staring off into space. After a while of that he got up and left the table and then the apartment. He didn’t bother saying anything to Mom about where he was going. She looked like she was fighting hard to keep from crying.

It turned out that Pop collected other men from the neighborhood and they visited the fish market. They broke into the store and found the man who had offered Mike and me five bucks. He was in the back room chopping up what was left of Chucky. I didn’t learn that part until recently, but that’s what they found. It was days after that when Pop asked me how I knew where Chucky would be. I couldn’t explain it to him, so I shrugged and told him I just knew.

For years I had convinced myself that none of that happened. That it was a dream I once had, or maybe a story I heard, or something from a movie or TV show that I saw as a kid. After meeting Zachary Lynch, I started remembering more about that day back when I was a seven year-old kid and thinking that maybe it wasn’t just a dream. I found the old newspaper stories about that man in the fish market and what he did to Chucky Wilson, and then dug out the police reports. My Pop had died when I was twenty and Mom is in no shape these days to remember anything, but I talked with Mike and he confirmed what happened. All those years we never talked about it, both of us pretending it never happened.

“What did you see that day, Stan?” he asked.

I shook my head and told him I didn’t know, and from the look on his face he seemed relieved to hear that. The fact is I did see something. When that man came out of the fish market wearing his stained apron over a pair of dirty khakis and even dirtier tee shirt, for a moment I didn’t see a man but something ghoulish, something from out of a nightmare. It only lasted a second, if that, and then he turned back into a balding and scrawny middle-aged man, but for that moment I saw something else.

Later, after talking with Mike, I sat quietly and remembered everything I could about that day and wrote it all down. After all those years I finally accepted what I saw. I still have never told anyone about this other than Zachary Lynch, and he’s the only person I know who would possibly understand.
Posted by Dave Zeltserman at 7:49 AM