That’s the taunting note left pinned to the grisly remains of a well-known Hollywood actress. In MALICIOUS, the third thriller in the series, former LAPD detective and famed serial killer hunter, Morris Brick, is drawn into chasing the SPM killer (you’ll have to read the book to find out what SPM stands for—but trust me, the killer is not at all happy about this name. In fact, he’s deeply insulted by it!) 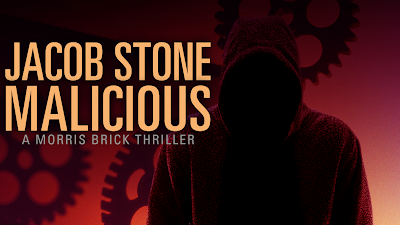 Morris and the rest of his team will learn that the SPM killer has constructed an elaborate Rube Goldberg death machine, and that this victim is only the first domino in the machine to fall. If the rest of the dominos are allowed to fall hundreds of thousands of people in Los Angeles will die.

Since the concept of the Rube Goldberg machine inspired  me to write MALIOUS, let me provide a little background about it. Reuben (Rube) Goldberg (1883-1970) was a Pulitzer Prize winning cartoonist known for his zany contraption machines; such as an ingenious automatic mouth-wiper for soup eaters. In this cartoon, the action of a man lifting a soup spoon to his mouth causes a cracker to be thrown into the air, which then causes a parrot to jump off its pedestal to snatch this airborne cracker, which causes a further sequence of events, all leading to a napkin swinging down and wiping the man’s mouth. Anyone who has ever played the old game Mouse Trap or has watched a Wallace & Gromit cartoon has seen a Rube Goldberg Machine in action! You can find videos of more of these machines on YouTube. Here’s one that would’ve made Rube Goldberg proud! https://www.youtube.com/watch?v=RBOqfLVCDv8

One of the things I enjoy about writing Morris Brick thrillers is that while there’s a certain familiarity with each of them—they all have tough-as-nails Morris Brick and the same supporting cast, including his clownish, loveable, and loyal bull terrier, Parker, his smart and supportive wife, Natalie, his beautiful and steely-eyed daughter, Rachel, and the odd assortment of employees at Morris Brick Investigations (MBI)—they’re still very different from each other. In the first in the series, DERANGED, the book upends the reader’s expectation halfway through, completely altering what the reader thought was true. In the second, CRAZED, an interloper crashes the party and changes everything for both the killer and Morris. In writing MALICIOUS, I needed to construct a plot that was every bit as intricate as the Rube Goldberg death machine the SPM killer has so carefully built. In the fourth book, CRUEL (Sept. 2018), Morris must first unravel two older mysteries before he can track down the killer. And the fifth, UNLEASHED (March 2019), is a twisted psychological thriller. In all these books the killers have very different motivations, and Morris and his team face unique challenges in each of them.

So that begs the obvious question: what is a Rube Goldberg death machine? In the SPM killer’s mind, it is artwork of such majestic grandeur that it will leave the world gasping in awe. Any sane person would think it’s a living nightmare that could only be imagined by a lunatic. To discover for yourself what it is, again, you’ll have to read the book!
Posted by Dave Zeltserman at 10:25 AM